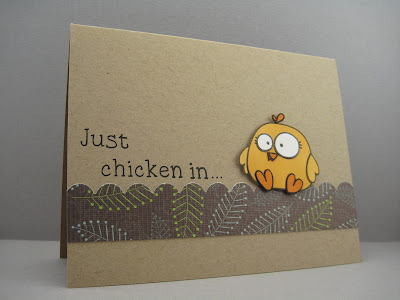 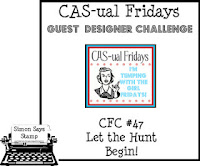 Popping in with a last minute entry for the CAS-ual Fridays challenge to use something you would find in an Easter basket.  Chocolate eggs, bunnies, chicks, even lambs all come to mind when I think of Easter baskets.  Also that crinkly plastic grass stuff.  I made a card with the grass and a chocolate bunny in mind but wasn't thrilled with the result. Unfortunately I screwed up the sentiment and dithered about how to fix it until I ran out of time.  I wasn't going to show it but now I think I will.  We all screw up cards once in a while right? 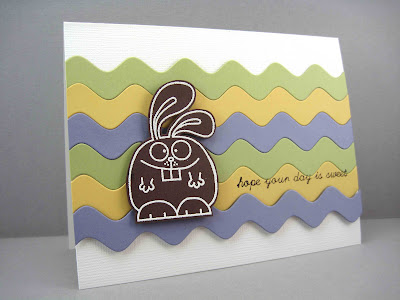 The reason I didn't have much time in the Craft Cave is also the reason I haven't been around in a few days.  I got sucked into a TV show.  I very rarely watch shows when they're actually airing because if I miss one then I can't watch anymore because I'm a little bit AR/OC that way (I know, I know - Tivo would solve my problem but that's not happening). So what I do is buy boxed sets once a series has finished completely and then watch them all at once.  (Same with books - I didn't read Harry Potter until they'd all been published). This means I'm usually pretty behind but hey, it works for me.  So on Saturday night I broke open Moonlight.  Did anyone watch that?  It only lasted one season (2007-2008 I think) and it was a bit cheesy and no one was gonna win any acting awards for it but boy did I get invested!  (It didn't hurt that Alex O'Loughlin is so easy on the eyes either).  Needless to say every spare second since Saturday night has been lost to Moonlight.  Thanks goodness it was only one season long!  Can you imagine what might happen when I start watching ER???  I may never be heard from again! 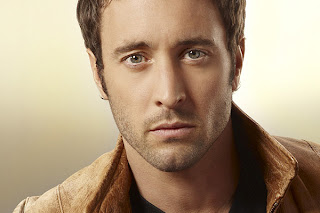 That chocolate bunny is soooo cute! You are too funny with the tv shows. The hubby and I did the same thing with "the walking dead", " entourage", "prison break" and "lost"! So I feel ya!

Your chick card is so much fun! And although I hear what you're saying about the sentiment, your chocolate bunny card is very cute, too. You may have to book a couple of weeks off to watch ER!!! Also often easy on the eyes. :)

Both of your cards are awesome dearie!!!

Both cards are really fun, Jen! I hear ya with missing an episode of TV shows,but I don't think I would be able to sit still long enough to watch a whole season :o)

Ooh, I did that a while back with Grey's Anatomy. I was obsessed, I think. Thankfully there are a few new episodes to air this season yet. Great cards, the yellow chick is so much fun! Thanks too for playing at CAS-ual Fridays!

I got sucked into The Voice this year which got me sucked into Smash....Less crafty time and bloggy time....ha!

LOL... I loved Moonlight - and Alex O'Loughlin is devine! Love your cards - great sentiment for the first cute card :)

Jen I love both cards, I honestly do not see a screw up. Love the large ric rack, I need to get that die.

Such cutie pie cards....Dang, that DUDE is cute:)

These are fab cards Jen! I don't watch much tv, but I love a movie and that can be just as dangerous. Welcome back!

Wonderful cards Jen - I really like your graphic style. Watching TV shows all at once is a great idea. It drives me mad having to wait until the next episode of something! Vicky x

ER...oh, I loved that show :)
I find so many shows get cancelled after I start liking them that I wait for them to make it a full season before I start watching. And I totally get how absorbing it is - lately I've fallen for True Blood, Breaking Bad, Castle...and watching a whole season in a couple of days is too much to resist!
I love your "chicken in" card - that chick just makes me giggle! And kudos to you for sharing a card you weren't happy with. I should do that more- we all do it, and somehow it's reassuring to see other people's mistakes. I do love the chocolate bunny idea :)

I haven't ever watched that show...hmmm...he looks nice though :)

Love both your cards. and I can't tell what is wrong with the second...I love all the rick rack stripes..divine!

Darling work!
Thanks for playing at CAS-ual Fridays!
Laura

LOVE both of your cards!! VERY sweet and beautifully done! Thanks so much for playing with us at CAS-ual Fridays!

Oh Jen, you are sooooo funny!! I never saw the TV show that you mentioned, but I'm glad that you had fun watching it. Even though you didn't have much time in your craft cave, the work you did get done is OUTSTANDING!! I especially love the chocolate bunny with the chevrons - sooooo CUTE!! Thanks so much for playing with us at CAS-ual Fridays!! We're so glad you did!

Your cards are so cute! I love the pastel ric-rac and "chocolate" bunny. And yes, I screw up cards quite often, in fact.
I do the same thing with shows I want to see! I get the DVDs at the library and watch them on my own schedule, especially in the summer when we're not busy watching hockey and basketball. And I just got the Harry Potter series last Christmas, so I'm still on book 5! I'll have to look into Moonlight--thanks for the recommendation!

Love the chicken in! I did the same thing with lost and there were many seasons! Watched them one after the other on Netflix... No housework got done -LOL! Those cliffhangers would have killed me if I had to wait it out.

Love your blog title - had me grinning before I even scrolled down to see the cute card. And, you are so brave to show your bleeper! You can salvage it - there are no mistakes in crafting! Your tv story was a kick...we need to step away from the crafting once in awhile. Love this entire post.

I never even heard of this show but oh boy he's cute, still can't beat a chocolate bunny for Easter though ;0)
My scrapped cards hit the bin too quick or get recycled darn quick to show :0)
Love that little chick and the bunny too, best critters for the challenge!
Jenny x

You kill me, Jen! That's the same guy who's on Hawaii Five-O. He's totally hot!

Your cards are awesome. You always come up with the funniest sentiments! I love that chick card and I never would've thought about making a chocolate bunny out of that one. LOL

seriously THAT's your screw up???? clearly i am the RSB kinda gal who would call that done and perfectly fine! see what you mean by easy on the eye ... ;)

Ha! Ha! I am so bad for that too. I like to watch shows when they are done for the season too, mostly because I hate waiting til the next week to find out what happens. I am currently stuck on Justified, with Timothy Olyphant. He's pretty nice on the eys too!!

Anyway, gorgeous cards. I love the zig zag/ric rac that reminds you of that grassy stuff. Perfect!!

Love this! I love the colors and the sentiment makes me crack up! Hope all is well and that you have been finding time to craft away in the Cave this week!

Look at you with your super cute cards. LOVE that chicken in one too much, puns are my fave.

Both of these cards are so very sweet.

Jen - this post is too funny! And I can totally relate to cute boys taking up every spare moment (and I see that a couple of the other posters before me agree): PRISON BREAK!!! My brother and SIL got us hooked on it when we went there for Christmas. Luckily it's on Netflix, and lemme tell ya...I spent A LOT of time watching and re-watching those episodes just to see Wentworth Miller. Ugh...I just wanna do things to him...ahem, excuse me. Great cards too, BTW! (but seriously though...Wentworth Miller...those eyes...that skin...)

Such cute cards! Love that little wonky-eyed chicken!!! And your chocolate bunny is too funny:)

I'm a binge tv-watcher too! I agree with everyone else that Netflix is the way to go. I'm so impatient and I love watching a whole season all the way through! I've never seen Moonlight, but isn't that the guy in Hawaii 5-0?

That chicken card is so cute!