One of my New Year's resolutions was to not spend time on Sunday in the Craft Cave.  Sunday is Luis' only day off work so I want the day to be more about him and what he wants to do.  Often we end up doing odds and ends around the house (landscaping, painting, tiling - whatever needs doing).  We also always take the hounds for a swim and often a walk as well.  Today I decided to take Luis for a walk at Ferry Reach, one of my favourite parks.  I can't believe I've never taken him before and today was absolutely gorgeous - sunny with a light breeze. 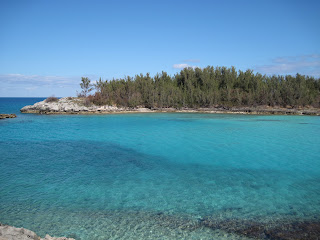 We were there for about 2 hours.  It's a pretty rocky walk in some parts and I always like to climb around the cliffs instead of following the straight paths. 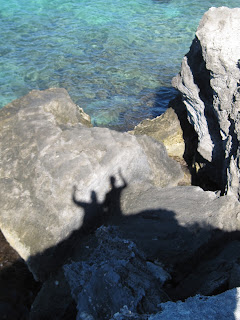 Throughout the walk we came across tons of Portuguese Man O' War - a jellyfish that's pretty commonly found around the island - but you don't usually see this many on the shoreline all at once and in so many clusters.  As a kid I thought they looked like big bubbles blown from grape Bubble Yum gum and then dropped into the water.  The bubble part is pretty but they have long, thin tentacles which give a nasty sting. 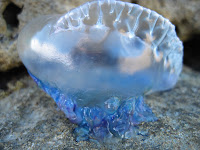 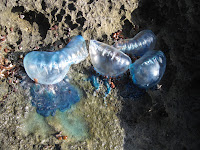 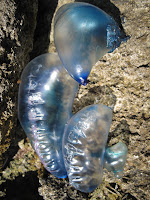 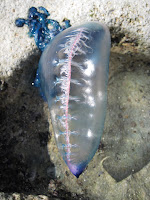 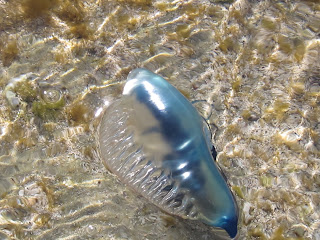 We also came across a handsome crab.  Normally when you see these you see what's left of their shell after some seabird has had it for lunch.  Or you see them scuttling off ahead of you along the rocks.  This guy was pretty bold though - he let me get up close and personal for a picture although he did wave his claws at me! 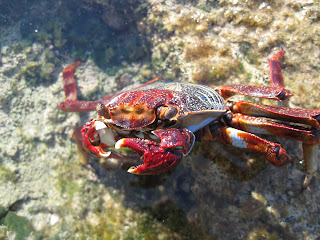 There are several old fortifications - or what's left of them.  I love the rusty old iron door frames that are still hanging in there after a few hundred years. 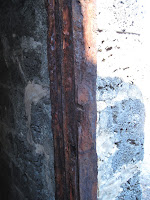 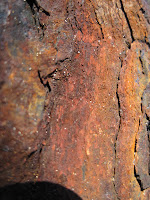 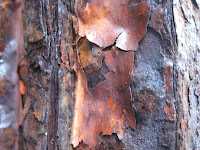 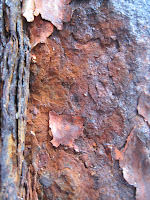 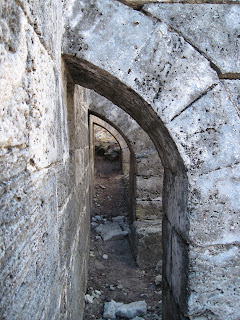 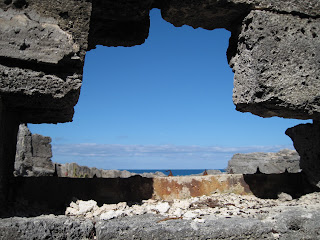 I love in the picture above how the bars in the windows have rusted down to little nubs and look like Hershey's Kisses sitting there in the window frame. 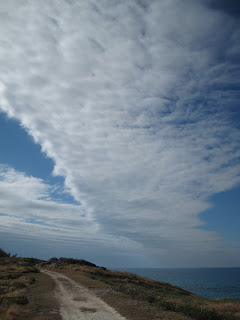 This was the last stretch we walked along before heading to the pub.  While there we ran into a couple of friends who we hadn't seen in months and joined them for lunch.  This covered another New Year's Resolution for me - stop being so much of a hermit and make more of an effort to get together with friends.  Okay, so it was luck and not effort that got us together but at least it happened and we had a great catch up.
Hope you've all had a great weekend and perhaps tomorrow I will actually post some cards!  :)
Posted by Jen W. at 9:08 PM

Email ThisBlogThis!Share to TwitterShare to FacebookShare to Pinterest
Labels: Bermuda, My Home

Jen, absolutely stunning photos...sounds like a wonderful day! And a perfect day that you ran into friends for lunch too!

What gorgeous photos! Obviously your subject matter is stunning, but you have captured it all so well. I particularly love the photo with your shadows. What great memories this day will hold!

WOW, Jen, I'm so envious of where you live. I LOVE the photos! The one with your shadows waving is adorable and I was absolutely fascinated by the jellyfish photos... always am! I just had to chuckle at the crab waving at you and I LOVE the old fortifications. It's great to see that historic part of the island! Thanks for sharing such beauty.

Oh Jen, these photos are sooooo amazing. How lucky you are (back) living in Paradise! Enjoy every minute there with your furry children and hubby :o)
PS: Thanks so much for stopping by my blog and leaving a comment...so nice of and so appreciated by me.