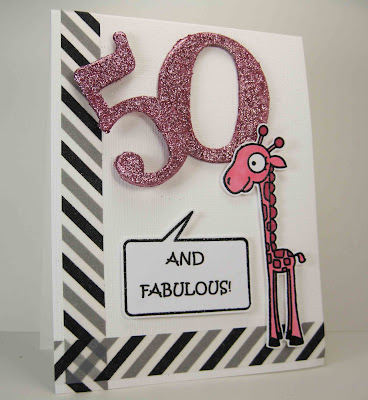 HELLO, my crafty friends!  I feel like I've been away from Blogland forever!  Between being sick for a few weeks and then traveling to Chicago to visit my brother, I haven't spent much time in the Craft Cave or visiting any blogs.  I'm on a major catch up now though and hope to get around soon to see what you've all been up to.  For now though I have a card that I made for a co-worker's mother.  Apparently she's a big fan of giraffes, pink and glitz!  I have a few giraffe stamps but this Paper Smooches one is my favourite.  I'm playing along with this week's Paper Smooches Sparks challenge - Anything Goes.  I'm also going to toss this in the ring for the Paper Crafts Connection Gallery Challenge - Milestone Birthdays.

We had a wonderful time visiting my brother in Chicago and even had a bit of snow while we were there - just a light dusting - enough to be pretty but not problematic.  We also did quite a bit of shopping.  This is a very Bermudian pastime.  The shopping here on the island leaves a lot to be desired so when Bermudians go abroad they tend to go a little crazy.  I made my first trips to Archiver's and Hobby Lobby and some craziness definitely happened...  Gonna have to make a lot of cards to pay off those credit card bills!  :)  I especially loved Hobby Lobby and it's probably a good thing there isn't one anywhere near me.  It's a good thing I had to stick to stuff that could fit in a suitcase.  I probably could have filled a shipping container without trying too hard!  Here's a pic of some cool letters I picked up for the Craft Cave.  Still have some decorating to do but I think this is a good start! 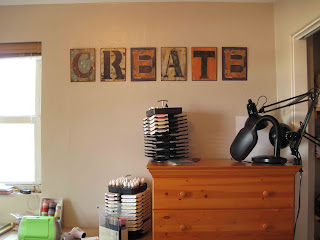 What a wonderfully fun card. I love that cute giraffe, and your glittery 50 is da bomb! Glad you had fun in Chicago. I went to my first Hobby Lobby over Thanksgiving in Arizona, and it was totally over the top.

She's going to love her card!!!! That giraffe is adorable! Fun that you got to go shopping:)

I'm glad I don't live by one either, I went overboard at the one by my mother's when we were visiting her out of state. Cute card!

What a fabulous card Jen, I love the glittery 50! She is going to love it. Aren't Hobby Lobby and Archivers the bomb? We don't have them in Canada and it is always a treat if we are somewhere in the states that has them. Happy New Year!

Jen, you were right by me! I wonder which Archiver's you went to. And you probably would have caught the 50% off Hobby Lobby's house brand sale while you were there ... I stocked up on a few brads, acrylic blocks, and embossing powder. Love the letters you got, and I think I have that same dresser (did you order it from Overstock a couple years ago?)

I was wondering how your Archivers trip went!! Sounds like you had a blast there and at HLs! I don't blame you for going nuts. There's nothing like buying in person and being able to take it home with you!

The card you made for your coworkers mom is adorable! Love the grey/pink combo with the bit of washi:)

Oh no, you didn't! But yes you did. LOL That is crazy how much ink you have that photo. Love the letters though! :D Such a fun card. That giraffe totally makes me laugh!

Glitter.... giraffes... and pink? That should be easy! Cute card Jen! ps I'm glad I don't live in the US... I wouldn't have a craft room big enough either, I mostly rely on online shopping here too. pps Your wall art looks FAB!

Beautiful your work, is wonderful. Kisses from Spain.

Absolutely adorable card...I love the giraffe. Oh so sweet! thanks so much for playing with us at PaperSmooches Sparks...and your trip sounds fabulous! Can't wait to see you put all the goodies to work!

This is absolutely adorable!

Glad that your visit with your brother and to the US was fun and fruitful, Jen! Love these letter and this fun card. Great sparkles. Happy New Year!

Hey Jen, sorry to hear you have been sick ~ that's not fun! But, I tell you what is fun~your adorable card! Love this giraffe stamp, he's too cute.
PS: Happy you got to shop in the BIG city, but that can be really really dangerous, I only have to drive 40 minutes to Michael's and Hobby Lobby so I am ALWAYS in trouble! :o)
Happy New Year to you and your family!

Oh, please, Jen, this is ridiculously perfect and pinned!!

What a fun card -- maybe pink giraffes will be seen after the birthday is celebrated, too! :D All that stuff you bought in Chicago will HELP make cards to sell, right? So it's all good. And funny, I never pictured that a craft CAVE would have a window. ;) Love the letters!

I'm so glad you got better in time to go on your trip! Travel while sick = icky.
I am LOVING those glittery numbers, and MAN, that PS set has been on my shortlist for a long time. THey've got to slow down so my budget can catch up :)

What a fabulous card. I love how you combined those elements: pink, glitz and giraffes. :) I've not been to a Hobby Lobby, but I've heard one has moved in just a ferry ride away from where I live. Next time I'm in the city, I'll be making a stop for sure. :) ann

This card is fabulous, Jen! Chicago is on my "to visit" list. And I might even come to Bermuda one day. ;-) When I go to the USA, eventually, I'm taking an empty suitcase and visiting every crafty store possible, AND I'm going to place lots of online orders to be delivered to my hotels. I'm sure excess baggage is cheaper than the postage to Australia, LOL!

Cute giraffe, and I love that sentiment! Glad you had fun shopping, I've never been to either of those stores, but word on the street is that a HL is coming to a mall near us!

SOOOO fun! LOVE the glitter and the washi tape:) I bet your co-workers' mom really enjoyed this card!! THANKS so much for joining in the fun and playing along with us over at the Paper Smooches SPARKS Anything Goes challenge!!! Can’t wait to see what you create for this week’s challenge– Vintage:)