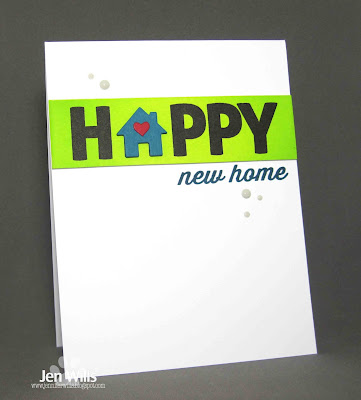 Welcome to Week 254 of CASology!  Take a look at the cue word for this week: 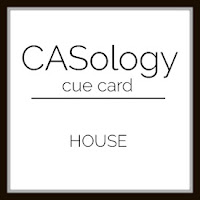 This started out as a one layer card but, as usual, I inked outside of the masked off stripe and ended up with a mess.  Clearly I need to mask off EVERYTHING that I want to stay uninked!  I liked the ombre effect of the inking though and didn't want to chuck it so I just cut out the stripe, popped it up on foam tape and added it to a new card blank.  It adds some dimension so I think I can say this way a successful save.

Looking forward to seeing what direction the cue word takes you.  Check out the gorgeousness from the rest of the design team then play along!

LOL, you + me 2 peas in a pod Jen, I always have to mask off the entire room when I am doing this!! I think it is an excellent save, love the bright green popping behind the lettering. I really like the little house as the A. Clever. Cx

What a fun idea to use the house as a letter! Cute card Jen!!

The ombré-ness of the strip makes this card perfect!

So bright and happy!

Happy accidents deliver the best results, Jen, as is evident in this great card! Love that lime!! The rest of the colours literally leap off the page! Awesome as always, Jen!!