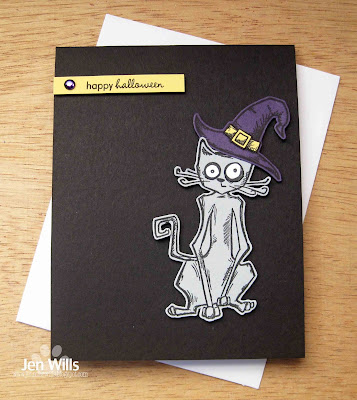 Welcome to Week 219 of CASology!  Take a look at the cue word for this week: 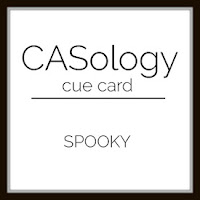 I don't have a whole lot of Halloween stamps but I did recently get the Stampers Anonymous Crazy Cats and the corresponding Crazy Things set which conveniently has a witch's hat in it.  I thought this kitty looked pretty spooked - spooked by something spooky!  :D  I did simple paper piecing with coloured cardstock and, although you can't really see it, I coloured the gem by the sentiment to match his hat.  I took some inspiration from the photo and colours over at Simon Say Wednesday challenge where there's a kitty with a purple hat.  I was pretty pleased with my card up until the point I had to photograph it but after several (million) attempts I finally managed to get this picture.

Looking forward to seeing what direction the cue word takes you.  Check out the gorgeousness from the rest of the design and then play along! 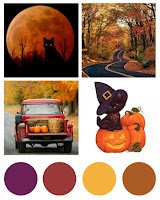 Crazy cat to a t!

I love your card Jen ! CAS as desired ! I love the google eyes of this cat ! Who scares to the other ? Thanks for sharing.
Izzy Scrap

Yay for Crazy Cats! And for choosing a Duncan colour for this. ;) Such an awesome card. Might just be CASEing this!

Loving that fab hat on the cat, it's the perfect 'spooky' choice Jen!

Thanks for joining in this week at Simon Says Stamp Wednesday Challenge
Hugs,
Caryn x

I don't know whether to be afraid or laugh, Jen. I love that crazy cat, spooky as he is.

That cat is beyond spooky! Nice touch with the colored gem Jen!

This is so very adorable. Love that crazy cat and her jaunty hat.

Jen, this is classic! That cat - definitely spooky...or spooked! (It's all in the eyes!) Great colors, super fun Halloween card!

Hey Jen!! What a great looking cat! I love the pop of color you used on the banner and the hat. I really like the purple and yellow combo. Nicely done.