I have spent the last week and a half in the seven circles of computer hell.  My old Mac has been on it's last legs for a while and I finally got a new one but was not prepared for how few things would transfer easily from one to the other.  Quicken and Canon's ImageBrowser are now the bane of my existence and at the moment it's taking both computers in order to accomplish editing and uploading photos.  I'm slowly figuring things out but in the meantime there are a lot of bad words being said and I apologize for not visiting anyone lately.  I will be back as soon as I can sit at the computer for more that 10 minutes without wanting to throw it out the window! 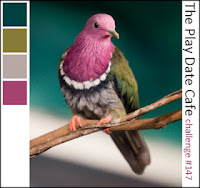 I did finally mange to get a few cards made and uploaded today including this one for the Play Date Cafe.  I used the new Dreamcatcher set that I won from Market Street Stamps latest release.  That first feather is actually an evergreen color but I'm still getting the hang of my new photo editing as per above!!  I'm also going to enter this in the Simon Says Stamp Anything Goes Challenge.

What a fabulous stamp set -- awesome that you won it! And an awesome card you've made with it, of course. The white embossing is perfect. Good luck with the new computer... never fun. :(

How frustrating for you Jen! I love the embossing on your card, it really makes the colours of the feathers pop :)

Super cute card with the various gems. Sorry to hear about your computer issues. Hope you get it fixed soon. Hugs!

how frustrating! you've made such a beautiful card!

Learning new computer ways always makes me say bad words, even occasionally invent new ones. Seven circles of computer hell - I'm going to have to remember that phrase! Sucky.
I love the card - and that you won the set. Score!

welcome back....ugh, sorry to hear about your computer icks. As I look on my work top I have a mac mini and a macbook pro...need both, the mac mini is for photo editing but burns out after too much use and shuts down...so that why I have to do it quickly and then hop on the macbook pro. I just need to break down and get an external card reader...anywho's...I'm soooo happy to have you back and wow...love your take on the colors! Excellent! Thanks for joining us at The Play Date Cafe!

Good luck with the new computer... it feels like it takes forever until it feels like it's your own! Sweet dream catcher and fun take on the challenge! Glad to see you back!

Ugh...ugh..ugh..I hate computer problems...so frustrating. We want to spend our time creating...not messing around with the computer! Hope everything gets straightened out soon...and you are back with a beauty. Love those colorful pearls!

Gorgeous card - love the pops of colour and the bling. Hope things get better soon!

Super cool card, loving the bling! Thanks for playing along at The Play Date Cafe!

This is so cool!

UGH! Sorry about your computer problems!! Aren't they SO FRUSTRATING?? Why yes - you know that answer.

Love the card! The embossed feathers are an awesome touch! And the random gems too!!!!

Have a great week!

Gorgeous card Jen :-) the dreamcatcher is FAB ,, what a great stamp and the sentiment is perfect ,,:-)

good luck with your new comp ! hope you work it all out soon xx :-)

thanks for joining us on the Simon Says Stamp Challenge :-)
luv
Lols x x x

Very cool use of the colors.

Wow those feathers are so cool!

Things will get better. Your card is awesome, so trendy and fun.

such a cool take on the colours! love the dreamcatcher with the gems

Congratulations, Jen; this is an awesome card! Hope your computer woes are being resolved!

hmmm don't think I want to go there!!! Hoping you're up and running smoothly soon...sounds like you have more patience than me :0)
What a great image to paper piece...Hannah had a thing for dream-catchers a few years ago, they're very pretty things. Lovely card Jen.
Jenny x

I feel you pain... computers suck! Hope it is better now.

This is amazing. What a beautiful stamp set and perfect use of those colors.